Historically, a number of major catastrophic earthquakes have resulted in a real loss of life and property world-wide, including, but not limiting to San Fernando, U.S. (Ms=6.6, 1971), Loma Prieta, U.S. (Ms=6.9, 1989), Northridge U.S. (Ms=6.7, 1994), Izmit, Turkey (Ms=7.4, 1999), San Salvador (Ms=7.6, 2001), Alaska, U.S. (Ms=7.9, 2002). During the last decades, in particular, the overall exposure to seismic risk has increased not only due to the higher population density but also due to the more challenging construction methods and the multilayered connection between the various urban (inter-city or inter-country) socio-economic activities. Within this complex urban or inter-urban built environment, the energy transportation systems, despite their structural simplicity, are seemingly one of the weakest links in terms of seismic safety. This is because their potential failure or loss of serviceability can have a disproportional direct and indirect socio-economic impact on the overall affected area. Most importantly, seismic damage is not analogous to the earthquake intensity. In fact, a moderate earthquake which would have caused only minor damage to residential buildings can lead to a local but critical failure within an energy storage or transmission facility, thus imposing disproportional risk for human life, the environment and the overall financial and social life of the affected country. Damage to pipelines, particularly natural gas ones, has also a transnational dimension, since there are no political boundaries in natural disasters: consequences in one region can propagate to other regions and affect millions of people. This spatial dimension of seismic risk, which is propagated by the interdependency of energy network operation, is poorly accounted for in risk assessment primarily due to the absence of a comprehensive and integrated resilience methodology and the lack of a joint strategy for risk management. 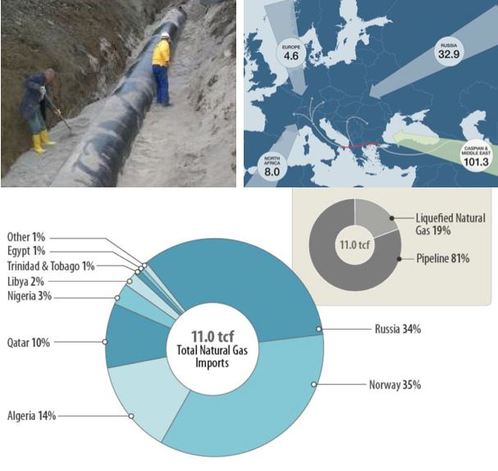 Currently, energy production, preservation and safe transportation is one of the top priorities at a European level, as reflected on multiple research objectives of the newly introduced research framework Horizon2020. Natural gas, in particular, has a key role in the future of energy supply for the E.U., with a growth anticipated to rise from currently one fifth, to one third of total energy supply within the next 25 years. Alternative transportation routes are also of major significance, as they cross areas of substantially different levels of seismic hazard. Today, up to 66% of gas transportation to Central and Northern Europe is currently being performed by high-pressure onshore pipelines coming mainly from pipelines traversing the Russian Federation and the Commonwealth of Independent States, although an increasing quantity will be provided by sea transportation of Liquid Natural Gas (LNG) as well. In the next decades, the increased demand for energy in European countries will undoubtedly require the smooth and safe transfer of hydrocarbons from the East Mediterranean, Middle East and North Africa. A recent example of a major 1.5 billion € investment is the Trans Adriatic Pipeline (TAP), transferring natural gas from Azerbaijan to Central Europe through regions of significantly high seismicity, namely Greece, Albania and Italy along side with the envisaged Turkish Stream also crossing south eastern Mediterranean. From these premises, arises the need to eliminate the probability of occurrence of a potential seismically induced failure (i.e., related to explosion, fire, leakage etc) that would not only have devastating environmental impact in the affected areas, but could also cause operation disruptions with equally significant socio-economic consequences throughout Europe. Clearly the concept itself of mitigating seismic risk of natural gas pipelines is a major significance for all energy producing and consuming countries, thus can be seen as a leading priority for Europe.

is an Intersectoral/International, Research and Innovation transfer scheme between academia and the industry in Europe and North America focusing on mitigating Seismic Risk of buried steel pipeline Networks that are subjected to ground-imposed permanent deformations. It also aims in developing a (nearly real time) Decision Support System for the Rapid Pipeline Recovery to minimize the time required for inspection and rehabilitation in case of a major earthquake. EXCHANGE-Risk involves novel hybrid experimental and numerical work of the soil-pileline system at a pipe, pipeline and network level integrated with innovative technologies for rapid pipe inspection. The outcome of the project is a series of well targeted exchanges between the partners and ensures transfer of knowledge between the academia and the industry, Europe and North America as well wide dissemination of the methodologies and tools developed to the engineering community.